Golden light peeks in the window as morning breaks on Bear's Neck Inn. The party can smell bacon as Erlene cooks breakfast downstairs. Wazo is up first, then Tegan and Aaron. They hear gruff complaining from downstairs, "Erlene, it's overrun with snakes! I can't even get to the door."

Wazo heads down for breakfast, and she sees the voice is coming from a dark skinned dwarf wearing scale mail and carrying an axe. He has a long black beard. He is trying to get Erlene's attention since it seems like he knows her. He tells her his father's run down windmill on the western hill is overrun with snakes, he can't even get inside. He wants to hire people to kill the snakes.

Aaron and Tegan sit at Wazo's table without asking, and after enduring her glare, they discuss whether or not to take Bodir's job. He overhears the word "snakes" and introduces himself as Bodir Halfgray. He explains that the windmill is an inheritance from his late father Baldir Halfgray, who in his will mentioned that there is some kind of treasure hidden under the windmill. Bodir offers 45 gold to the trio to handle the snakes and help retrieve the treasure. They accept.

They make the long walk uphill. It's a hot day, and a sweaty climb. As they reach the top and stare at the tattered windmill vanes, there is an aggressive hiss. Combat!

Bodir offers to let them head inside to see the treasure. Through the windows, they can see that the windmill is run down and dilapidated. They can hear birds chirping inside. They decide to join him.

Bodir heads into the windmill first, and the chirping inside quickly turns to growls. Combat!

She talks with the kenku for a bit, and after conferring with Bodir, she convinces them to let the group retrieve the buried treasure in exchange for letting the kenku keep the windmill and the land it's on.

The group discusses where to look for this treasure. Aaron uses Eldritch Sight, but doesn't see anything interesting. After some puzzled exploration, wondering if they are prepared for digging to search for treasure, the group hears scratching in a corner. Tegan moves some crates and mice scurry away, revealing a trap door!

Nobody has a key, so Bodir impatiently smashes his way in with his axe, then scurries down the ladder. Tegan follows, and takes out a torch, lighting it. Wazo follows, then Aaron.

At the bottom of the ladder is a small room. All four walls are covered with strange full-height portraits:

Above the third portrait, in golden dwarvish letters, is written:

Cut me and I bleed crimson red. My heart is made of stone.

Aaron uses his Eldritch Sight and observes that the third portrait, the one under the message, has a magical aura.

After some discussion of what it could mean, Tegan suggests cutting the cherries, since they have stones and red juice. He slices the cherry earrings on portrait #1. There is a button underneath, so he presses it. A small rock falls on his head.

Wazo uses her glaive to poke the cherries on portrait #2, and after finding a few buttons she cuts the sides and bottom of the painting loose, rolling it up. It has a button under each cherry, and one more on the back of the head. Doing the same to the other two non-magic paintings, they discover that portrait #4 has two more cherry buttons, and portrait #1 has one cherry button, and one extra button in the upper left side.

They press all the buttons one at a time, but nothing more happens.

They decide to cut out painting #3 as well, but the wall behind is blank. Feeling the wall, Tegan notices that where the walls meet, there is room for a hinge.

Bodir tries pushing on the door, but it seems like it's secured somehow. Everyone pushes while Tegan holds in a button. Bodir thinks it was easier that time, so Aaron, Tegan, and Bodir hold in as many buttons as they can, skipping the ones that weren't behind cherries, while Wazo prepares to push on the blank wall. When they push the cherries all together, the door slides away under its own power!

As the door slides open, a dwarven skeleton holding a shortsword and a bow is revealed, and it attacks, shouting in dwarvish, "Who disturbs my TREASURE??"

As the dust clears, in the next room they see a mound of dirt, ankle high, in the center of the floor. Past it on the far wall is a polyptich showing a tree like a Japanese maple in all four seasons: 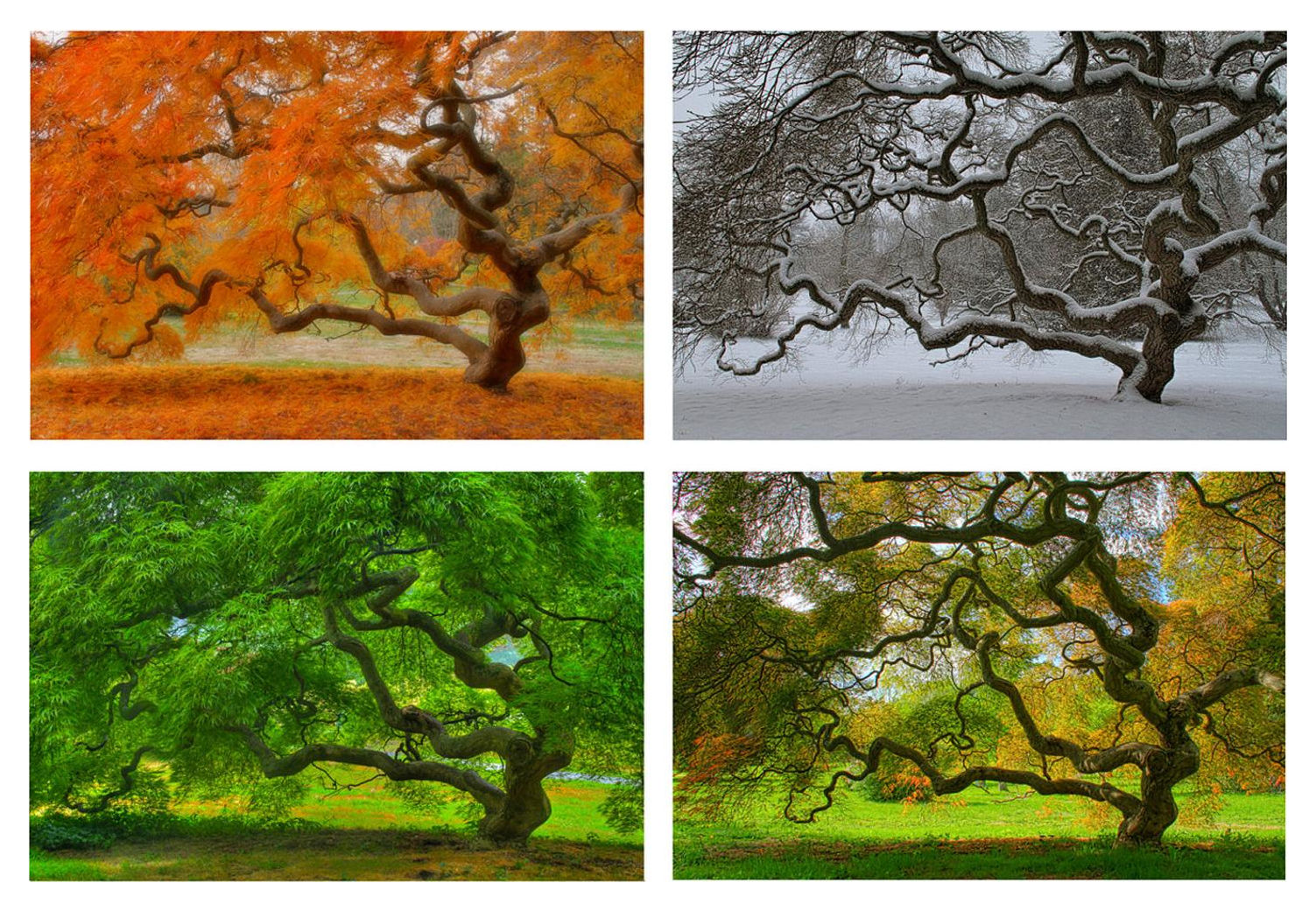 Aaron sees that the dirt and all four paintings are magic in some way.

Wazo pokes the dirt, and Aaron and Bodir touch paintings, but nothing happens.

They try all touching paintings at once... nothing.

Aaron searches through the pile of dirt, and finds a very small, black seed. As he picks it up, the mound reforms, and the seed jumps into the pile. He adds water from his waterskin. The spring painting lights up. They blow on the sprout and it rewinds to a seed and the spring painting goes dark. They water it again, and it sprouts. While this is going on Bodir decides to take a short rest after his scuffle with the Kenku.

Wazo brings the torch flame close, and it grows more. The summer painting lights up too.

They put out the torch, and the tree grows even bigger. In the ceiling there is a click, and the wall with the paintings slides open. Inside is a small room with a chest.

Tegan wakes up Bodir, who runs over and greedily opens the chest. He takes out a single sheet of paper and reads it, looking disappointed, then angry. He crumples it up and tosses it aside. Tegan retrieves the note and translates it:

The Dawn Marches on,
Through the streets of Hillvon,
Your precious treasure is not here.
Your inevitable defeat comes near. (n.b. "Your" here is plural possessive)

Bodir is angry. He smashes things on his way out. As he storms out, he keeps saying, "I don't understand this."

After fuming and pacing for a bit, he realizes he hasn't paid the group yet. He throws the 45gp on the ground and keeps pacing. Wazo asks for his axe, before he hurts himself with it, and he throws it into the wall of the windmill.

Wazo collects the coins, and then sits next to Bodir on the steps. Tegan joins her, and the three of them talk for a bit, with Aaron listening from a distance. Bodir is dejected, but he has good memories of his father. He eventually agrees that Tegan can send a copy of the poem to Hillvon, and everyone heads back to Twipeaks. Wazo hangs back, saying she'll catch up. She tells the Kenku that the treasure was missing, and Bodir was just angry. She says they can keep the windmill, since they held their end of the bargain. She gives them two dead snakes she had saved from earlier, then she catches up to the rest of the group.

As the group is walking back to Twipeaks and thinking about the poem, Aaron notices that Dawn Marches is capitalized. Tegan remembers that the Dawn's March is a dangerous mercenary group stationed around Hillvon.

The group offers to go to Hillvon with Bodir. He declines, explaining that he lives in the opposite direction, in Gorhant. He'd rather cut his losses than go that far from home.

They decide it may be best to go to Hillvon directly, instead of risking a messenger getting caught and revealing their knowledge.

Back at the Bear's Neck Inn, Bodir gets his dad's journal out of his room, gives it to Tegan, and heads to bed.

Tegan visits the provision store, which is called Godard's Goods and Things. He asks the proprietor, Twira Godard, if she has a healer's kit for sale. She says she does, and fishes it out from a display case she is using as a counter top. She wants 6gp for it. Tegan offers an exchange instead, and trades her his steel mirror and his dragonchess set. She is about to close shop for the night, so he leaves right after. He gets back to the inn just as Aaron and Wazo are finishing a wordless meal.

After dinner, Wazo goes to Bodir's room and knocks. She tries to get him to read her paper, but he can't decipher the ancient text. He mentions his deceased father would have been able to read this ancient dwarven writing.

Everyone goes to sleep. Aaron has a dream: flashes of mercenary warriors attacking his estate, his parents screaming. A hand is holding his, and he startles awake. He shakes off the dream and falls back asleep.

The group is now level 3.