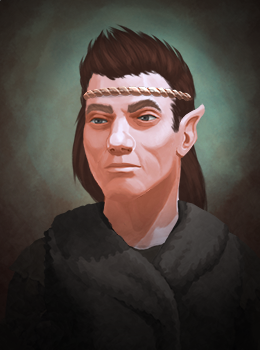 A medium-height half-elf man of about 30 years, with fair skin and brown hair. He is sharply dressed in the Hillvon style and carefully groomed, with excellent posture and the relaxed air of one who has been insulated from small inconveniences. There is an uncanny brightness in his gaze that makes eye contact a little dazzling, like sun reflected in a windy pool.

Tegan is a born leader. He embraces challenges, delighting in the chance to pit himself against the world. He may not realize it, but for him the struggle is often more invigorating and satisfying than success itself. Patience with others is a struggle that has not been that satisfying. He is starting to feel the weight and the joy of fraternity, as he builds history with Wazo and Aaron. He respects their willingness to face danger and pull their weight.

He learned as a child that it is his privilege and duty to protect and care for the people of Eska. This is his birthright, since he has inherited not just the Steadmount name, but also the gifts of arcane and divine magic. It's important that he be a hero of the people not just in fact, but also in their hearts. Selfless, courageous deeds can inspire others to heroism, but only if they are seen and known.

Since meeting Wazo and Aaron and nearly dying, Tegan is re-examining the priorities he was taught. His new awareness of his own mortality has forced him to realize that he can't help others if he's dead himself.

Tegan can cast certain arcane and divine spells, due to his distant Celestial ancestry and a talent for magic. His poise and natural grace make social situations his forte. When making decisions, he finds that following his heart usually works better than relying on logic or philosophy. Physically, while he isn't setting any records, regular training in athletics, dance, and self-defense have left him in good shape. He is nimble, and although he isn't very strong, he has excellent endurance and good athletic technique.

He has recently acquired additional abilities through a pact with the Shadowforge, a weapon maker in the plane of shadow.

Since he was an adult, Tegan has assisted the duke and his mother, and focused on improving himself through meditation, study, and practice, especially learning magic from his mentor Faust.

Three years ago, Tegan’s friend and lover Sophinia Drue, a half-elf sculptor in Hillvon, went missing. She had no known enemies, and the authorities exhausted every lead from conversations with those who had seen her before the disappearance. Tegan searched actively for her for a year, but maintained hope after that until he learned of her death by eating the Feldmar faerie fruit. She asked him to avenge her death at the hands of a cult.

As he pursued the search, Tegan befriended a gnome merchant named Valtix, who also lost someone: Daphixi Jobe. They often played dragon chess, and she usually won.

In 882, Carnelis Faust, Tegan’s mentor, revealed something that shook Tegan’s belief in the Steadmount name. Steadmount archmages all undertake a pilgrimage to a lost ancient temple hidden in a centuries old forest, where they pledge secret allegiance to an ancient creature/weapon called Ryloirth. In exchange for the pledge, they gain powerful abilities that allow them to live up to the lofty expectations they have inherited. Supposedly there is also a magical fountain where even more power can be unlocked, but its whereabouts are long forgotten. Now Tegan faces a crisis of conscience: is it better to take the pledge and attempt to serve two masters, or break the tradition and risk angering a powerful secret ally?

Tegan recently began a sabbatical, to see the kingdom in person. He said he hoped that it would give him valuable experiences and perspective. The sabbatical is actually cover for investigating Ryloirth and doing some soul-searching. While he remains loyal to the kingdom, Tegan is questioning his beliefs about his family, and about the nature of nobility.

After learning of Sophinia's death and promising to satisfy her desire for vengeance, Tegan is beginning to relax his devotion to morality in favor of a more justice-oriented ethos.