Located at Batano lake, where the Trinda river joins it from the north. 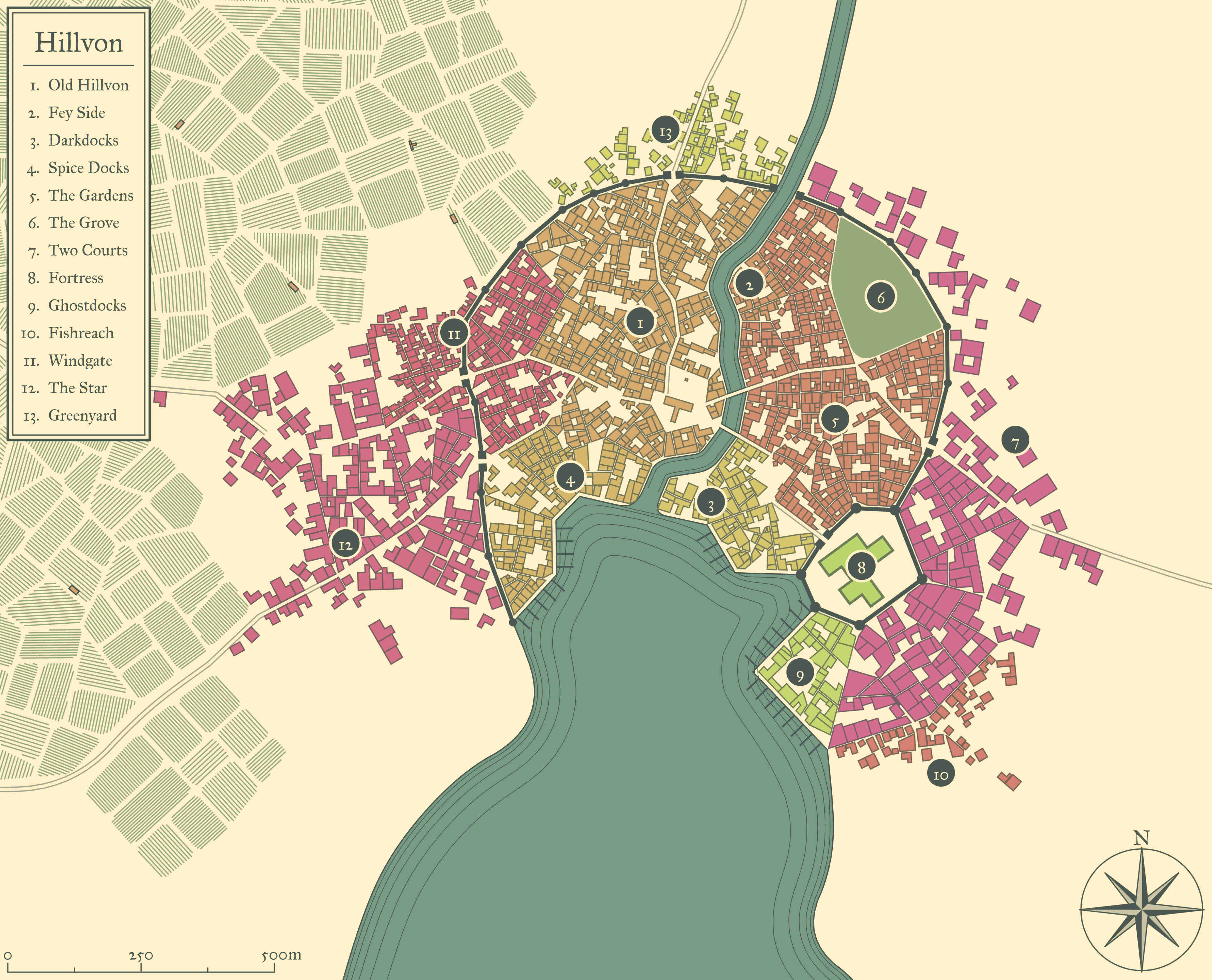 (Clockwise from the lake)

Many of the houses and businesses here date to a time before Hillvon had walls. The streets are a little too narrow now, and the crowded buildings have mostly expanded upwards as the city grew, leaving the streets mostly in shadow. The district has lots of small stone buildings, augmented with wooden second (and some third and fourth!) floors. The streets are cobblestone.

Old Hillvon has a high concentration of craftsmen and artisans.

The last time this district burned down was in 740, when a house there was struck by lightning. The tallest houses here have lightning rods now, but due to fire concerns there is also a fire department. Some residents, mostly the dwarves, have expanded down as well as up, and there is a small network of underground tunnels with storefronts and residences.

This small, mostly elven district is surrounded by The Gardens and the river. Considered to be a part of The Gardens.

So-called because of the dark, water resistant stone used on the first story of some buildings. Warehousing, shipping, and hospitality.

This is the upscale district of the city inside the walls, starting at the river and continuing uphill towards the fortress. Houses here are mostly built from large blocks of white stone, and the streets are packed gravel. Many of the houses have rooftop terraces, with flowering vines providing shade and growing down the side of the building, and many houses with enough land have elaborate, well-cultivated gardens in the front or a walled garden in the back. Seen from across the river, or from the top of the city walls, the district appears lush and green.

This is an orchard and park for residents of the whole city to enjoy. It is nestled against the east wall of the city, and it's a popular place to relax from the faster pace of life elsewhere. Fruit is for anyone to pick and eat but may only be harvested and taken out with a license. Off-limits between 9pm and 5am.

Large residences here house families and businesses that wanted more space than they could afford inside the walls, as well as apartments for people who want to be close to the city, but retain a little more independence than they can get inside the walls. Two Courts security is contracted out to Dawn’s March and a few other mercenary services. The Dawn's March headquarters are in this district.

The military stronghold of Hillvon, also the residence of Duke Hendrix.

Dock region, technically outside the city walls (but also closest to the fortress). Home of a famous fromagerie, the Salt Sisters, who make “ghost cheese”, a regional delicacy.

Craftsmen, farmers, hunters, and fishermen who can’t afford to (or prefer not to) live in the city.

The only district that spans both sides of the wall, Windgate is difficult to categorize. It is less wealthy than other areas of the city, but home to all types of people.

The suburbs of the city. Home to many farmers and traders. Along the road there are a variety of small businesses, many run out of the first floor of a home. In the outskirts there are several overpriced inns to catch naive and exhausted travelers.

Shanty town outside the north gate of the city.