The party left off their adventure in the sewers of Hillvon. Wazo being gravely wounded by the poison of the phase spider decided along with Aaron and Tegan to take a short rest. After, the party encountered a grate that was slightly different than the rest of the others they encountered. They notice that this grate has a propeller that is able to spin above it. Aaron uses mage hand to try to push it and pull it with no resolve. He then commands the mage hand to spin it. It spins slightly and the party notices the door opens a crack and smashes down.

Tegan then gets an idea to use his wind fan that he had received from Doctor Vance Leighton. The gust of wind quickly and forcefully turns the propeller allowing the grate to open completely but in a few seconds, the wind subsides and smashes shut with a loud crash. Tegan decides that they should wedge another grate underneath it to prevent it from closing. Wazo, exhausted but wanting to help, walks over to the nearest grate and tries to lift it but she is just too tired so Aaron helps by shape-shifting into a muscular dwarf and helps her carry it back to the propeller gate.

Tegan, being hesitant to use his wind fan again and potentially causing it to fall into tatters, asks Wazo to flap her wings to see if she can spin the propeller. Wazo tries but fails to cause it to open. Tegan reluctantly uses his wind fan again and opens the door while Aaron and Wazo shove the grate underneath. This causes the door to remain open even after the propeller stops spinning. The party quickly makes their way into the next sewer chamber.

Glass Gators in the Murk

The party enters a large room with a small 10 foot walkway around a large murky basin of water in the center of the room. All of a sudden, out if the murky depths, an alligator with glass-like skin pounces on but misses Tegan but the other grapples and claws Aaron. Initiative!

After seeing that the coast is clear, the party decides to head into an open room. As they are exploring, they begin to hear a slight hissing sound growing louder. They begin to smell something horrid and feel pain in their lungs. Aaron and Wazo leave the room quickly but Tegan dawdles and feels his lungs burning more. He decides to follow the rest of the party and leave quickly.

After Aaron asks Wazo for a torch. Tegan lights one and hands it to him. Aaron floats the torch into the gas room with Mage Hand, and the poison gas goes up with a boom. The sound of hissing gas stops. Everyone heads cautiously back through the room. Tegan spots a pile of rags and investigates it. He finds a pouch with 36 gold and a Bag of Holding. He excitedly dumps his backpack's contents into the bag of holding and puts the bag back into his backpack.

The party wanders further and reaches what is marked on the blueprints as the entrance. They see a flight of stairs to an old wooden door.

The party discusses their objectives: 1. Obtain guard clothes for disguises 2. Find out who is funding them

After discussing, Aaron leads the way and opens the door and enter the bottom of a latrine. They notice two holes that allow some light to stream in from above. Tegan boosts Aaron up to one of the holes. As his eyes adjust to the light, he sees he is in a small latrine room with a closed door. He climbs out and tells his friends that the coast is clean. He reaches down for Wazo's arm and with the help of Tegan's boost, lifts her up. Aaron and Wazo help pull him Tegan up last.Tegan cleans off the sewage from everyone with prestidigitation.

While he's doing that, Aaron has Flit scout on the other side of the door. Through flit's eyes, Aaron sees a small hallway, which is a dead end one way and a kitchen / dining room the other way. 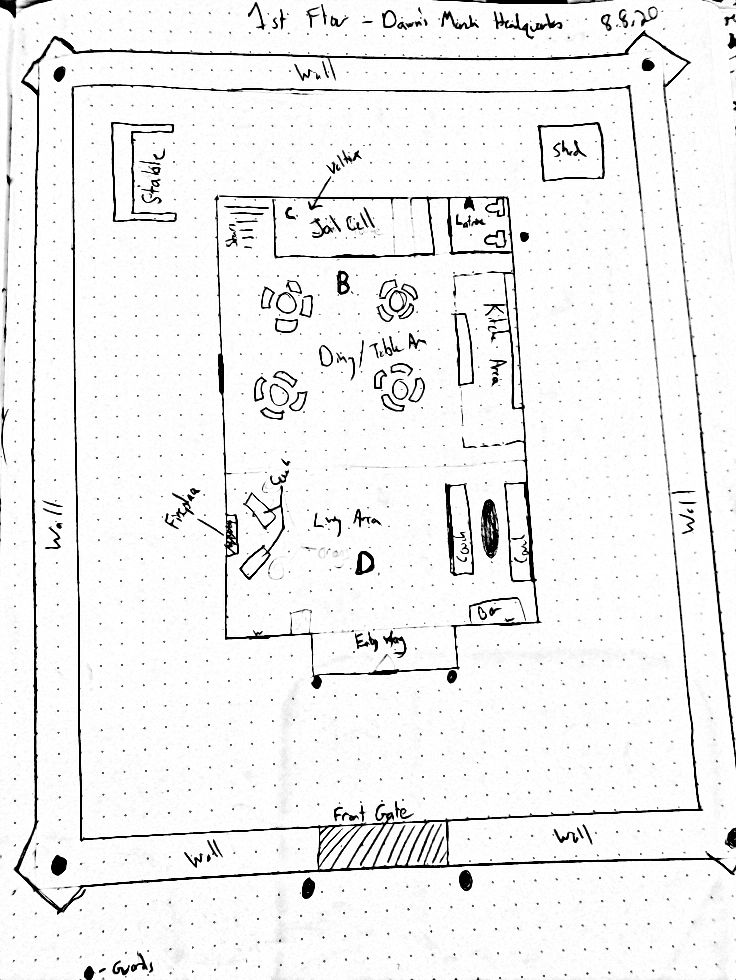 The party quietly heads towards the dining hall. They see four tables, mismatched chairs and hear a large amount of flies buzzing around food-covered, dirty plates in the kitchen sink. It appears the Dawn's March has left in a hurry. They also notice stairs up to the right and a small cell near the latrine hallway with iron bars. Aaron sees huddled against the wall of the cell is a female gnome.

Tegan recognizes her as Valtix! She has her black hair in a pixie cut, blue eyes, and masculine style of clothes. Tegan suggests that Aaron should send Flit to scout ahead.

Tegan investigates the area and easily finds a key hanging on the kitchen wall near a window. As he grabs the key, he sees a guard on patrol on the grounds outside. He unlocks the cell for Valtix and asks her if she wants to escape or help.

She explains that she was brought in blindfolded. They had kidnapped her when she was sleeping in her home. She believes she had angered the Dawn's March by undercutting their Heart's Fruit Wine business. She also mentions that she heard the half-orc guards complaining about being left here while the rest left in a hurry. The Dawn's march has been worried about something and all the guards have been buzzing about it.

Meanwhile Aaron scouts with Flit and sends him up upstairs via the spiral staircase. The stairwell leads to a relatively short hallway. On the left is an open door to barracks, maybe 70x30ft, messy beyond that the hallway bends left. 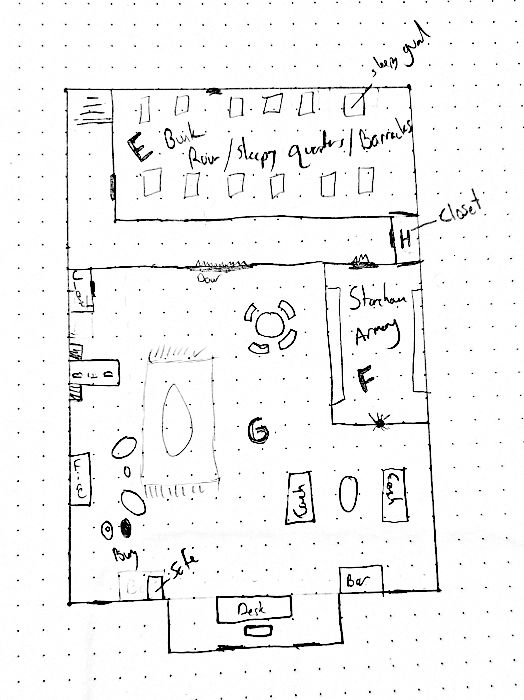 Valtix, still weak from being imprisoned for weeks, offers to stay behind and plans to cry out in pain, "Oh, my stomach!" if she sees someone coming.

The party then sneaks up the stairs, and sees the open barrack's door. To the right, they look out the window and see a guard is patrolling atop the wall.

In the barracks, Wazo notices a human sleeping in the far bunk. Tegan gives her his dagger as she lost hers in the sewers. She stalks over to the sleeping guard and slits his throat. He chokes on blood then dies. Aaron pokes around his bed and doesn't find anything in the dead man's trunk. Tegan finds an unopened trunk and inside it, there is a uniform which is in decent shape. Tegan and Aaron keep looking for a second uniform while Wazo sits, exhausted. Eventually, Aaron finds a tattered outfit. Aaron shapeshifts into the deadman's form and puts on the tattered outfit. Tegan hides the body under the bed and with prestidigitation, cleans the sheets and then re-soils them to the right level. Then he changes into the good outfit to blend in.

All of a sudden, Valtix calls out, "Ohhhh, my stomach!" and the party hears foot steps approaching the door.

"Hey Arek"
"Hey man, how's it goin?"
"Bored on my patrol."
"Hey I thought you were sleeping?"
"I couldn't sleep, I thought I'd take a walk."
"Ok, well see ya" and continues his meandering rounds unsuspecting of Aaron and not noticing Tegan.

Aaron leaves the barracks, and heads past the bend in the hallway. The hallway turns left and there are three doors. He looks through a slightly open one, and it looks like an office/bedroom. There are tables, chairs, and a couch. It is dimly lit.

He tries to sneak in, but stumbles into the door causing it to open and creak loudly. Inside there is a half orc and a hulk of an orc, who is heavily armored. Startled by the sudden barge in, they yell at 'Arek' asking him what he's doing there. 'Arek' claims clumsiness. They berate him to leave. Aaron notices that they were burning papers in the boss's office.

Aaron quickly rushes back, explains what he saw. After a brief conference, they decide to burn the barracks as a distraction.

Fire at the Barracks

Tegan lights a bed on fire and throws an illusion in the window there to mask the flames. The party runs to the armory room. Tegan and Wazo see a hole in the back of the small room. From the other side of the wall they hear, "The boss said we have to burn all these documents. Hurry!"

Peering through the hole, Tegan uses Chill Touch on the one in armor. The skeletal hand clings to him and they both drop the documents in horror. Tegan makes Minor Illusion of menacing voices. Aaron, watching through Flit, uses Dissonant Whispers.
They are FREAKED OUT. They run down the hallway. Tegan redoes the minor illusion sounds behind them as they flee.

The party runs into the room to try to rescue the documents. Tegan runs over to the fireplace, picks up papers and shoves them in the bag of holding. One looks like a ledger of some kind.
Aaron searches the desk and finds some old parchment. He also finds 200gp in a drawer.
Wazo looks around and finds a table. She keeps looking around the room.
Tegan looks in the bed, and finds an ornate dagger.
Wazo notices a safe. The group stuffs it in the bag of holding with everything else.

Looking out the window into the courtyard, they think the coast is clear for an exit. Aaron suggests that Wazo glides out the office window to safety, and Aaron and Tegan will try to rescue Valtix.

Wazo boldly jumps out and flutters down to the ground, then limps out the gate, putting on a show of begging for coins and being old. "Spare a copper piece for an old lady?". All while in the background, the DM's Headquarters in on fire.
As she stands near the gathering crowd who are watching the headquarters burn, she gets two coppers from a Hillvon local and an inspiration.

Aaron and Tegan leave the office and rush to the barracks. The roof has caved in, and black smoke is billowing. A bucket brigade is passing water. Aaron calls out, "We'll get more help!" as he and Tegan run past. They go to the cell in the kitchen. Valtix is there still. They free her and leave together out the front of the building, and nobody seems to pay them any attention or stop them as they exit out the front gate.

The party and Valtix collect in the same dark alley nearby which they used in their previous reconnaissance mission the previous day.

The party is now level 5!